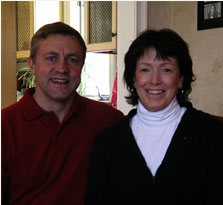 Tom was raised on a farm and has been around Thoroughbreds his entire life. He purchased his first racehorse in 1984 and has been actively involved in the industry ever since. Nancy earned her degree in Animal Science at the University of California at Davis. After graduating, she managed an Appaloosa and Thoroughbred breeding farm in the 1980’s, which is now Victory Rose Thoroughbreds.

Since purchasing the farm in April of 2000, the Clarks have transformed Rancho San Miguel into one of the leading stallion stations in California and the nation, investing in new pastures, barns, equipment, and housing for employees. These additions have allowed them to hire the most highly trained and skilled horsemen. As knowledgeable horse people and clients themselves, Tom and Nancy understand the importance of providing the best possible care.

Jenny joined the Rancho San Miguel team in March 2022, along with her daughter, herd of broodmares and retirees, dogs, cats and rabbit.  Jenny earned her Bachelors Degree in Animal Science as well as an MBA, from Oregon State University. After graduation, she spent several years working at farms and racetracks on the West Coast in such varied positions as groom, pony person, assistant trainer, tack store manager, media relations and turf writer.

For the past 17 years, she has managed Ten Broeck Farm in Ellenburg, Washington specializing in weanling to yearling pinhooks and rehab.  She also owned and operated Windway Farm in Ellenburg for the last 15 years where she bred and raised a few foals each year, did sales prep, rehab, took care of retirees and retrained OTTBs. 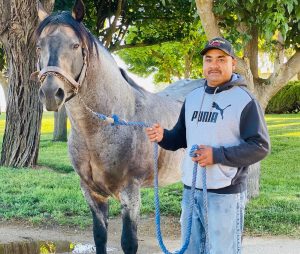 Gerardo began his horse career at Harris Farms in 2001, and over the years worked in many phases of their operation.  He handled stallions, worked with the vets, and was the assistant for the sales prep for 10 years.   In January of 2017 he joined the Rancho San Miguel team.  As the yearling manager his primary focus is on yearlings and also sales preparation.  He is the crew chief, and he assigns the crew to their duties each day.  And, as we work our way into the breeding season, Gerardo handles the teaser as we go through the mares each morning.

Ciriaco is the longest tenured employee here at Rancho San Miguel, starting his horse career here in June 2004.  He has had various roles over the years but found his niche four years ago when he became the assistant in the stallion barn.  Two years ago, he embraced the role of stallion manager.  He takes great pride in his stallions, and they have a mutual respect for each other.