Haynesfield son Hay Dakota dropped too far behind a slow pace last summer at Canterbury Park in the $200,000 Mystic Lake Derby, his strong rally falling a neck short of victory. But his rider Sunday in the $100,000 Mystic Lake Mile, Denny Velazquez, timed things better and Hay Dakota won an exciting edition of the one-mile grass race by a neck. 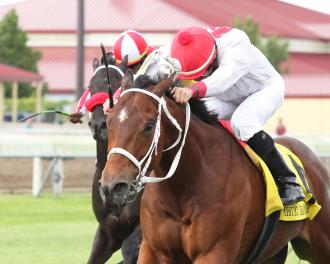 Hay Dakota’s trainer, Joel Berndt, also timed things well. He brought Hay Dakota back from a four-month break May 27 in a Canterbury allowance prep for Sunday’s race. Hay Dakota finished third, but got just what he needed to move forward into the Mystic Lake Mile.

Way Striking, coming off a good dirt-stakes win at Prairie Meadows, went to the front Sunday and set up shop on a clear lead while running his first quarter-mile in 24.08 seconds and a half in 48.03. Majestic Pride to the outside and One Mean Man to the inside crept into contention around the far turn, and by then Velazquez had gotten Hay Dakota out of sixth and into a golden spot just behind the leaders.

“When I saw the three of them were battling, I thought I’d wait to make my move,” Velazquez said.

Hay Dakota pounced at the top of the stretch and appeared to be on his way to a decisive victory, but Majestic Pride, racing between horses, stayed on gamely, as did Way Striking, who was ever so slightly gaining again in the final yards. One Mean Man, the 2-1 favorite, couldn’t finish with the top three and was fourth, 1 1/2 lengths out of third. Hootenanny, the 3-1 morning-line favorite, was an early scratch.

Alice Mettler owns Hay Dakota, a 4-year-old by Haynesfield out of the Harlan’s Holiday mare Churchill By the Sea, he has earned of $216,580. Berndt said last summer he remembered Chicago-based jockey Carlos Marquez Jr. telling him following a dirt breeze at Hawthorne several months before Hay Dakota even tried turf that Berndt and Mettler had a grass horse on their hands. After four dirt losses to start his career, Hay Dakota’s connections risked him for a $20,000 maiden-claiming tag in his Canterbury and turf debut.

Hay Dakota wasn’t taken, and by the end of 2016 he had become a graded-stakes winner after upsetting the Grade 3 Commonwealth Stakes last fall at Churchill.