SAN MIGUEL, California – Rancho San Miguel has set 2021 stud fees for its roster of seven stallions, led by the globetrotting Sir Prancealot (IRE) whose fee will remain a California-leading $15,000 for his second season at stud in California.

Sir Prancealot, who sired progeny which won stakes in at least 6 countries in 2020, will return from Cornerstone Stud in Australia after breeding 105 mares in California in 2020.  His offspring have shown a propensity for high quality racing in North America with 17% Graded Stakes winners and 53% Stakes Horses earning an average earning per starters of over $210,000 from his only 17 starters.  They performed very well in the Breeders Cup last weekend when Miss Amulet ran a good third in the BC Juvenile Turf S-G1 in her U.S. debut and Lady Prancealot ran a very close 4th in the BC Filly & Mares Turf-G1.  They have also starred in the sales ring at Keeneland this week when the all 3 race mares by Sir Prancealot offered sold for an average over $766,000 led by Grade I winner Lady Prancealot, who sold for $1,600,000.

Danzing Candy, a brilliantly fast multiple Grade 2 winning son of Twirling Candy who bred 331 mares in his first 3 crop and whose first crop will be two-year-olds next year, will have his fee remain at $5,000.  His yearlings have been well received in California, Washington and Florida sales, topped by a $115,000 colt at the 2020 OBS October Yearling Sale.

Curlin to Mischief, perhaps the best bred stallion in California being a ½ brother to Into Mischief, Beholder and Mendelssohn, will have his fee remain at $3,500. His two-year-old son, Good With People, is a multiple stakes winner of $199,000 and is the current favorite to win California-bred Champion Two-Year-Old colt in 2020.  In the sales ring, another colt was sold for $85,000, which was among the highest prices at the recent 2020 Fasig-Tipton California Fall Yearling Sale.  His fee will remain at $3,500.

Slew’s Tiznow, a record setting, Grade 1 performing dual stakes winner, who has produced 74% winners from starters while earning over $4.1 million, including 6 stakes winners.  His fee remains at $3,000.

Richard’s Kid, a two time winner of the Pacific Classic-G1 and earner of over $2.4 million, who has produced 27 winners already, of which 7 have already earned more than $100,000, including stakes placed Sedamar and Sapphire Kid.  His fee remains at $2,500.

Northern Causeway, a beautiful Graded stakes winning son of top sire Giant’s Causeway from the family of top sires City Zip and Ghostzapper, is the sire of 19 winners to date.  His 2020 fee will be $2,000.

More than 20% of the sales catalog in the Fasig-Tipton Sale at Los Alamitos are by stallions that stand at Rancho San Miguel, including 15 yearlings by the red hot first crop sire Danzing Candy, 8 by Curlin to Mischief (sire of recent Del Mar 2yo SW Good to People), 5 by Northern Causeway, 6 by Richard’s Kid, 7 by Slew’s Tiznow, 13 by Tom’s Tribute and 2 by U S Ranger. 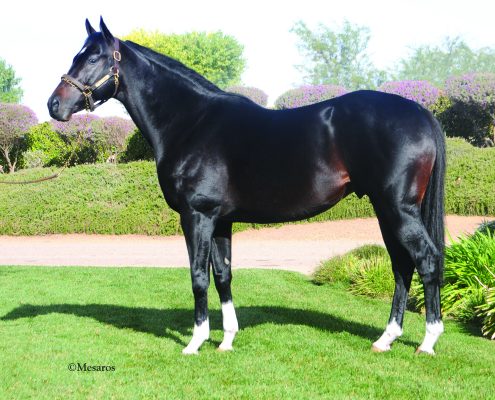