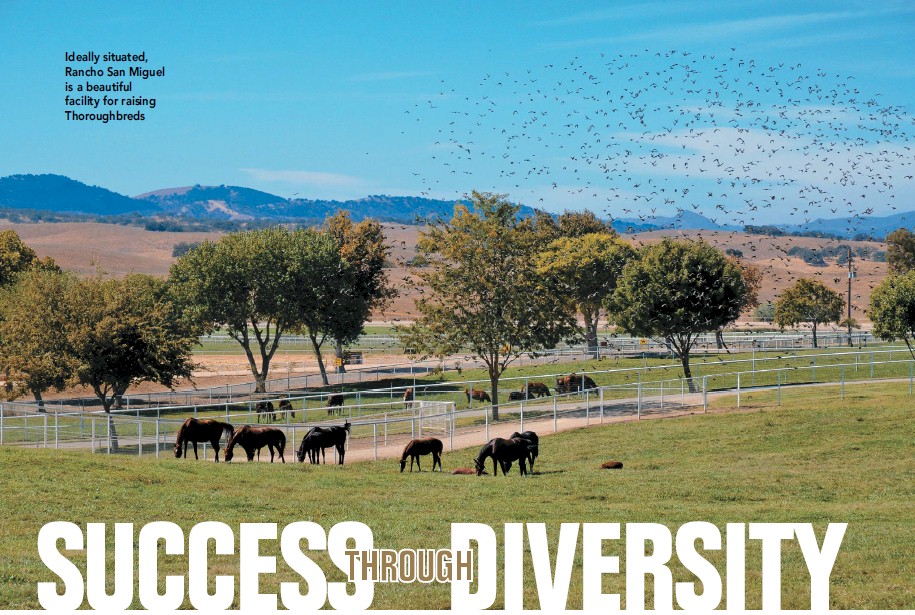 reprinted from the California Thoroughbred November 2018
Breeding winners is a goal each mare owner can approach differently. No matter what path a breeder prefers to take, Tom Clark and Clay Murdock want to provide the answer at Rancho San Miguel. 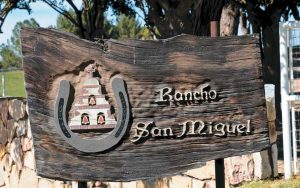 “We’ve got a number of dedicated clients who leave their horses at the farm year-round,” said Clark. “They’re constantly looking for new stallions to breed to, and they’re looking for different types of stallions. We need to meet the demands of our client base.” 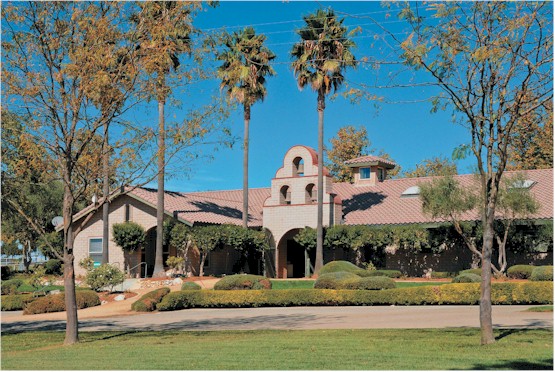 Clark and his wife, Nancy, own Rancho San Miguel, having bought it in 2000. Murdock has managed the property for more than 30 years, first for Dr. William Marano and then for the Clarks. Murdock, a team of dedicated employees, and the Clarks have worked hard to position Rancho San Miguel as a top California farm, and their efforts have paid of.

“Last year we bred more mares than we ever have before, right around 400,” said Murdock.

The farm’s location, a plethora of large, grassy pastures, and a wide variety of stallions play key roles in the farm’s success. Murdock’s longtime association with Rancho San Miguel and the efforts of the employees, many of whom have been there for years, are more reasons many California breeders patronize the farm and its diverse stallion roster.

Clark thinks so highly of Murdock that last year he nominated the manager for the prestigious Godolphin Thoroughbred Industry Employee Awards. Tough the awards come out of Kentucky, Murdock was one of three finalists in the Leadership Award—Farm category.

“We have great employees and great leadership from Clay,” said Clark. “We also make sure that we have a resident veterinarian on staff so that we have good care close to the horses and can respond very quickly.”

Dr. Jim Meyers has taken over the resident veterinarian position relatively recently. He grew up in the area and did his undergraduate work at Cal Poly San Luis Obispo. He obtained his veterinary degree from the University of California at Davis.

“We’re equidistant between the northern market and the southern market in California,” said Clark. “We’re about four hours from San Francisco and L.A., and we’re only about 20 miles from the ocean. So every evening we get a breeze that comes in and cools it of, which we think is very healthy for the horses.”

The Clarks and Murdock are in the middle of a renovation project that includes upgrading the employee housing, adding pens, upgrading existing barns, and the construction of a new 16-stall barn, with plans on the drawing board for still another barn. When that work is completed, Murdock estimates that Rancho San Miguel will have about 85 stalls spread among nine barns.

While Rancho San Miguel has a dedicated stallion barn, most of the other barns are multi-use to give the farm flexibility. When Marano owned Rancho San Miguel, it was primarily a training facility, but the Clarks and Murdock have now positioned it as a breeding facility. Services include all facets of breeding, foaling, and broodmare management, as well as sales preparation and the care of young horses until they are ready to go into serious training.

Rancho San Miguel sits on a good aquifer, and the farm has five wells and an extensive irrigation system that allows for good grass pastures. Mares and young horses have plenty of room, while each stallion has not only a spacious stall but an individual area so that he gets the exercise he needs as well.

Sydnee Brown aids Murdock as his assistant manager and broodmare manager, and she has become an invaluable member of the Rancho San Miguel team.

“She puts in a lot of hours,” said Murdock. “She helps with all of the foaling, and she watches the mares. She keeps up on all the medication. I kind of look at her like a mother hen. She has been a big asset.” 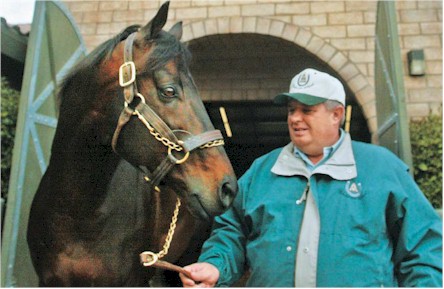 Gerardo Guerra is the yearling manager and does much of the sale prep work as well.

“He’s a very good hand— one of the best I’ve ever had— with a young horse,” said Murdock. “He helps keep the place going, and he handles the stallions during the breeding season.”

With nine stallions and the number of mares bred at record highs, the employees are especially busy during the breeding season. This past year Rancho San Miguel added an exciting prospect in Danzing Candy, a son of Twirling Candy and a grandson of Candy Ride.

That entire sire line made its reputation in California. Candy Ride, after a championship run in his native Argentina, won the Pacific Classic (G1) at Del Mar. Twirling Candy scored in such races as the Malibu Stakes (G1), Del Mar Derby (G2T), and Californian Stakes (G2). Then along came Danzing Candy to win the San Felipe Stakes (G2) and San Carlos Stakes (G2) as well as the Lone Star Park Handicap (G3) in Texas.

“We had a great response to Danzing Candy—we got a full book to him,” said Murdock. “He seems to be a stallion who could carry speed around two turns on dirt. We think his kind of race record should ft California very well.”

Danzing Candy has plenty of black type in his female family as well. He is out of the Songandaprayer mare Talkin and Singing whose half brother Better Talk Now won the John Deere Breeders’ Cup Turf (G1T) in 2004 and finished second in the race two years later.

Clark and Murdock are proud of the fact that the Rancho San Miguel stallion roster offers something for everyone. Pedigrees come from a variety of sire lines. Whether breeders are looking for a sprinter or a router, a dirt horse or turf specialist, they can find it in one of the Rancho San Miguel stallions. Te stallion roster has new prospects whose foals haven’t reached the races yet and proven commodities with several crops to race.

Curlin to Mischief is one whose first foals will race next year.

“His pedigree really says it all,” said Murdock. “We’ve had good reception, and he’s got some nice-looking babies.”

Unraced, Curlin to Mischief is by two time Horse of the Year Curlin, who has proved an excellent sire with the likes of champion Stellar Wind. Curlin to Mischief is out of the Tricky Creek mare Leslie’s Lady, making him a half brother to multiple champion Beholder, current top sire Into Mischief, and Mendelssohn, winner of the 2017 Breeders’ Cup Juvenile Turf (G1T), a graded winner in Dubai, and most recently third in the Jockey Club Gold Cup (G1).

Northern Causeway’s first foals are 2-year-olds of 2018, and he comes from sire power both top and bottom.

“He’s a son of Giant’s Causeway, and his dam is a half sister to City Zip and Ghostzapper,” said Murdock. “We’re just getting his babies rolling, and he even has a stronger second crop.”

Northern Causeway is out of the winning Silver Deputy mare Getaway Girl. The second dam, stakes winner Baby Zip, was named Kentucky Broodmare of the Year in 2005.

“He’s got one now, Rickey B, who is three for three. I think Richard’s Kid’s babies are going to get better with distance and age and time. He started 47 times and retired sound.”

Rickey B is just a 2-year-old, and he has already won at Del Mar, Golden Gate Fields, and Fresno.

“They are very nice looking,” said Murdock. “Rousing Sermon made a little over $800,000, and he’s a very good-looking horse. I think people tend to forget how good a 2-year-old and 3-year-old he was.”

By Horse of the Year Tiznow, Slew’s Tiznow is out of the Slewpy mare Hepatica, a cross that also produced graded winner Slew’s Tizzy. Slew’s Tiznow won two stakes at 3, and he was California’s leading freshman sire of 2015.

“Slew’s Tiznow has really come on lately in the summer and fall,” said Murdock. “He’s had six or seven maiden special weight and allowance winners. They seem to be very versatile, able to run on different surfaces and can sprint and go two turns.”

“Tom’s Tribute is a stallion we added last year,” said Murdock. “He’s a very good-looking son of Lion Heart. He’s got yearlings now, and they are very impressive. We got quite a few mares to him. He did all his running on the grass, but with Lion Heart there’s no reason they shouldn’t run on the dirt also.”

Typhoon Slew is a graded stakes-placed half brother to Slew’s Tiznow and Slew’s Tizzy by Stormy Atlantic. Injury hampered his racing career, and he’s only been bred to a limited number of mares. His first foals are 2-year-olds.

“He was very precocious and broke his maiden by 10-3⁄4 lengths when he was a 2-year-old,” said Murdock. “What babies we’ve had have been very good-looking. He’s a very good-looking, big, strong horse.”

The pedigree goes back to an outstanding California-bred family that includes world-record setter Double Discount and California Broodmare of the Year General Store.

U S Ranger sires many winners and often ranks high on the list of leading California sires by winners, both general and 2-year-olds. He is by Danzig—My Annette, by Red Ransom, and has sired such stakes winners as Solitary Ranger, Lawn Ranger, and U S Officer.

“He’s got good size for a Danzig and is very good-looking,” said Murdock. “He was undefeated as a 2-year-old in Europe.”

The farm supports the stallions, often with mares owned by the Clarks. Both Murdock and Tom Clark praised the owners of the stallions for supporting the horses as well.

“I think that’s an important part of the strategy,” said Clark. “In California we really need the owner to be all in, supporting the stallion and giving him the best chance possible to be successful.”

The California-bred incentive program has helped Rancho San Miguel, its clients, and the stallions in those efforts. Murdock is giving back to the industry, having joined the board of directors of the California Thoroughbred Breeders Association. He brings a valuable farm manager’s perspective to issues.

“I think we’ve continued to build on our success over the years,” said Clark. “We’re able to attract high-quality stallions. In a market where the industry has probably shrunk by more than 50% when we started in the business—a very difficult environment—we’ve been able to sustain our growth and our market share and be successful.” 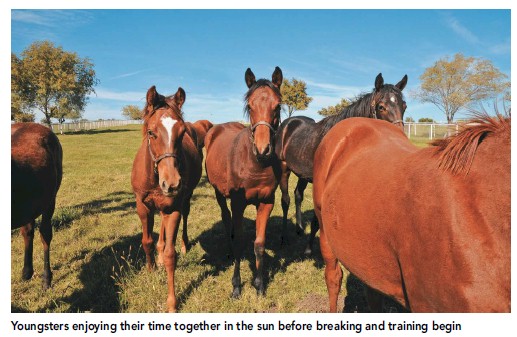