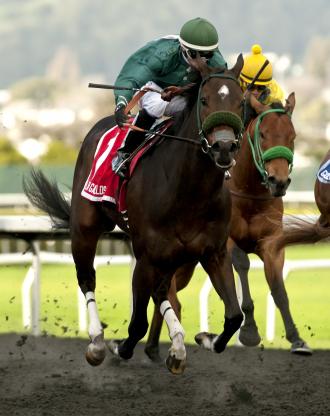 Zakaroff took the the 1 1/8-mile race in 1:51.34. More Power to Him was moved up to second from third after the disqualification of Ann Arbor Eddie who finished second while impeding Tribal Storm.

Zakaroff relaxed early and dropped back down the backstretch.

Frey moved his mount out in the lane and was finishing strongly.

“Normally you might be (concerned about being boxed in), but my horse was completely relaxed and in hand,” Frey said. “It did get a little bit shaky coming out of that final turn, but luckily we were able to muscle out and get a clean trip outside.”

Zakaroff, a gelded son of Slew’s Tiznow, was bred in Kentucky and was a $25,000 yearling purchase at the October 2015 Barretts sale by Antone Metaxas. Greg Gilchrist assisted Specht in picking him out.

He was bred by Eagle Ridge Racing and is out of the Mr. Greeley mare Grand Advice,

More Power to Him, another son of Slew’s Tiznow got the place money of $40,000 and is now multiple stakes placed and an earner of $112,593. More Power to Him was foaled and raised at Rancho San Miguel for his connections.