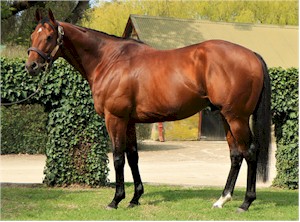 Bursting onto the scene as champion freshman sire in Europe, Sir Prancealot (Ire) has quickly grown to become a truly international success story.

To date Sir Prancealot (Ire) has had 13 runners in the U.S. for 9 winners, including 5 stakes performers, 4 of which are stakes winners.

“The statistics in America were becoming quite freakish so the United States became the next natural home for him in the Northern Hemisphere,” said Sam Hayes of Cornerstone Stud.

The flag bearers for Sir Prancealot (Ire) in the USA have been Beau Recall and Madam Dancealot both of which are multiple G2 winners and G1 placed. Beau Recall was an impressive winner on Kentucky Derby day in the G2 Churchill Distaff Turf Mile before running second in the G1 Just A Game Stakes at Belmont on June 8.

“The team at Rancho San Miguel share our excitement regarding Sir Prancealot’s (Ire) obvious potential and we are most grateful to Adrian Gonzalez from Checkmate Thoroughbreds who made the introduction and brokered the deal,” said Hayes.

“We are very excited to bring Sir Prancealot (Ire) to the U.S., and more specifically to California,” said Gonzalez. “It’s amazing to think that this horse began his stud career in Europe, moved to Australia and now his top runners are running in the U.S. With his statistics, he could arguably be the most useful stallion in the world. He’s been the big fish I’ve been after my whole career and I’m thrilled to syndicate him and begin selling shares immediately. Sam Hayes has been incredible to work with and I’m grateful for the opportunity to work together with him and Cornerstone Stud. With Rancho San Miguel, we’ve had tremendous success promoting Danzing Candy in his first two seasons at stud. Clay Murdock along with his staff at Rancho San Miguel, will give us the best opportunity to properly introduce Sir Prancealot (Ire) as a new and unique offering to the U.S. breeding market”.

“Sir Prancealot (Ire) gives California breeders a spectacular opportunity to be involved with a stallion that has Grade 1 stakes performers from a limited number of starters,” said Clay Murdock of Rancho San Miguel.

A stud fee has yet to be determined.