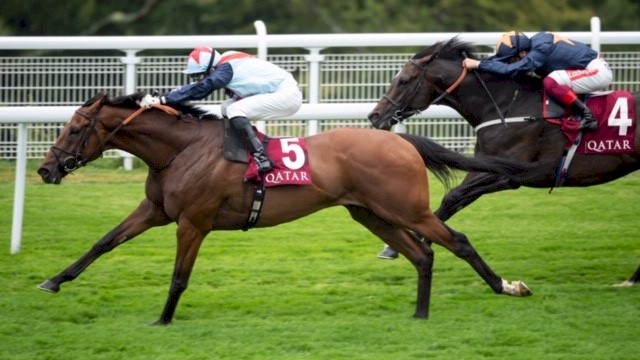 By Maddy Playle RacingPost.com
Sir Dancealot (Sir Prancealot) became just the second horse to win the Lennox Stakes twice as he struck at 6-1 for David Elsworth and Gerald Mosse on Tuesday at Glorious Goodwood.

The win signalled a return to form for Elsworth, who had not enjoyed a winner since Dandhu’s Fred Darling success in April. Sir Dancealot emulated Nayyir, who won the Group 2 contest in 2002 and 2003.

The five-year-old got on top in a narrow finish last year but it was more straightforward this time as he overhauled the well-backed 5-2 favourite Hey Gaman in the final furlong to score by a length.

“He’s a very good horse and he’s run a series of solid races,” Elsworth said of the gelding, who won the Hungerford Stakes at Newbury following his success in the race last year.

He was also full of praise for Mosse, who has ridden him exclusively for his last 11 starts, saying: “I’m his biggest fan. He’s a wonderful jockey and he did a brilliant job.”

Suedois finished third this time around, following a third-placed effort in 2017 and a narrow second last year. Speak In Colours, who endured a luckless trip on his first try at seven furlongs, was back in fourth.