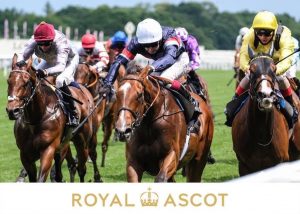 On June 17, Sir Busker made an impressive late run to beat a field of 22 in the Silver Royal Hunt Cup at Royal Ascot for his 3rd win in his last four starts since first stretching out to a mile.  Watch race HERE.

Also, Cotopaxi made her second start a winning one at Chelmsford City to become the first 2yo winner in the United Kingdom for Sir Prancealot this year.  Watch race HERE.  The first two-year-old winner worldwide was accomplished by Shine It Up in Italy 8 days earlier.

Finally, making it a perfect 3 for 3 on the day in the United Kingdom for Sir Prancealot when Half Nutz, who broke her maiden in her final of 8 starts at 2 last year, came back 238 days later at 3 to win a Handicap at Limerick in Ireland. Watch race HERE.