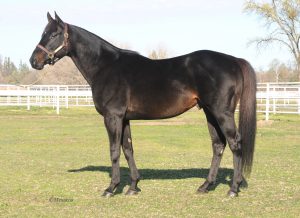 Veteran stallion Surf Cat, a multiple Grade 2-winning millionaire and the sire of 2017 California Horse of the Year Sircat Sally, will stand at Rancho San Miguel in San Miguel, California during the 2021 breeding season. His fee is $2,500, live foal guarantee.

The 19-year-old son of Storm Cat’s multiple graded stakes winner Sir Cat has stood exclusively in California since his retirement from racing in 2009 — originally at historic Old English Rancho and most recently at a small, private farm near Chowchilla.

From nine crops of racing age, Surf Cat has sired 57 winners from 84 starters to date, with lifetime progeny earnings of $4,046,140 and average earnings per starter of $48,168. His five black-type runners are led by Sircat Sally, a $552,860-earner who won three graded turf stakes at Santa Anita Park and California-bred Horse of the Year honors from the California Thoroughbred Breeders Association in 2017. He is also represented by the dual Grade 3 winner San Onofre ($402,730).

Conditioned by the late trainer Bruce Headley, Surf Cat won six Grade 2 races from 6 1/2 furlongs to 1 1/8 miles from 2005 through 2008: the Swaps Breeders’ Cup Stakes and two editions of the Mervyn LeRoy Handicap at Hollywood Park and the Potrero Grande Breeders’ Cup Handicap and two runnings of the San Carlos Handicap at Santa Anita. He also ran second by a head in Hollywood’s 2007 Triple Bend Invitational Handicap (G1) en route to earning $1,045,420 from his 23 career starts.

“I am thrilled to have Surf Cat back; he was one of my favorite racehorses,” said owner Marsha Naify, who campaigned Surf Cat with Headley’s wife, Aase. “Bruce did such a wonderful job training him. He has never been promoted very heavily as a stallion, but he has had some good runners, and I want to make the most of his remaining breeding years.”

“We are thrilled to have Surf Cat come to Rancho San Miguel,” said farm owner / manager Tom Clark. “He has an amazingly strong produce record from his small crops to date. We look forward to working with Marsha to help Surf Cat reach his full potential as a sire.”