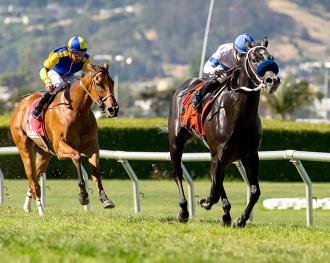 Chuck Dybdal
Albany, CA (June 8, 2019)-Mikes Tiznow ($5.20), bet down to favoritism in the final ticks on the tote board used his speed to good advantage, dominating the five-furlong $65,750 Albany Stakes on the turf Saturday at Golden Gate Fields.

The 4-year-old Slew’s Tiznow gelding broke sharply under jockey Ricardo Gonzalez and led runner-up Summersimage (also by Slew’s Tiznow) every step of the way as the pair ran one-two all the way around. Mikes Tiznow was timed in 56.83 (0.58 off the track record), beating Summersimage by 1 1/2 lengths. Morning-line favorite Brandothebartender, who was sent off the second choice, edged comebacking Tribal Storm by a nose in the final stride, one length behind Summersimage (an earner of $190,743).

Gonzalez shot to a one-length lead, going the opening quarter in 21.14 seconds. Gonzalez relaxed Mikes Tiznow during the second quarter, but still led by a length through a 44.47 half-mile.

“Sometimes you have to use that type of speed to your advantage,” said trainer Andy Mathis. “They may want to go with you, but if they do go for the lead, you may win the battle but lose the war.”

“He’s pretty aggressive out of the gate,” said Gonzalez. “But he’s so relaxed, you’d think he was running 23 and 46.

“Andy just said, ‘You know him’ for instructions. Once he took that lead like that, it was pretty easy for me.”

Mathis credits Gonzalez with teaching Mikes Tiznow patience and said, “He’s very relaxed on the horse, and that slows him down. If you pushed him, he might not be able to finish as well. He’s taught the horse how to run.”

“With a horse with that much speed, you can’t overrun them,” he said.

Mikes Tiznow, owned by Mike Schott, earned $39,450 for his second straight wire-to-wire score. In winning his stakes debut, Mikes Tiznow improved his career record to $157,555 with four wins, two seconds, and a third in eight starts.