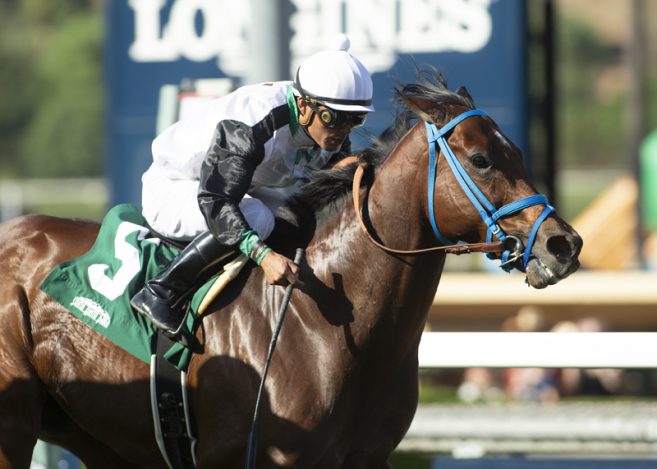 by Santa Anita Publicity
Arcadia, CA (October 19, 2019)-Claimed for $40,000 last time out, trainer Mark Glatt’s Castle broke sharply and made every pole a winning one in Saturday’s $100,000 California Flag Handicap, as he prevailed by neck under Abel Cedillo in 1:01.51–the fastest 5 ½ furlongs on turf at Santa Anita’s current Autumn Meet.

With even money favorite Tribalist unexpectedly far back early, Castle cleared off by a length heading into the far turn, with eventual second place finisher Grinning Tiger tracking in second.

“It looked like there was a lot of speed in the race and all Mark said was ‘Stay Close,’ said Cedillo, who was aboard the 6-year-old Slew’s Tiznow gelding for the first time. “My horse broke really good and we made the lead very easy and that was good for me.”

“I thought he was a little lightly raced for his age, so I was a little skeptical for the $40,000, but (the owners) were willing and I couldn’t see a reason not to claim him,” said Glatt. “Like with a lot of horses, I think the (extra half furlong) has helped him. Personally, I don’t care for the five eighths races, it takes a specialized horse. That extra furlong makes a difference.”

Owned by Where We At (stable), Castle, who is out of the Mr. Greeley mare Grand Advice, picked up his first career stakes win and his sixth win from 14 overall starts. With the winner’s share of $60,000, he now has earnings of $208,947.

Ridden by Heriberto Figueroa, Grinning Tiger was clearly second best on the day, finishing 1 ¼ lengths in front of King Abner. Off at 7-1, Grinning Tiger paid $9.00 and $5.80.

King Abner, ridden by Martin Garcia, had two horses beaten going into the far turn and just touched second choice What a View by a nose for third money. Off at 8-1, King Abner paid $5.40 to show.

Tribalist, off at even money, finished fifth.