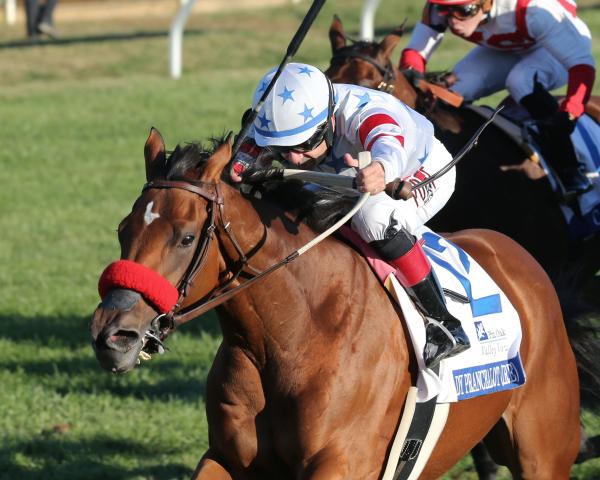 A 3-year-old turf filly named Lady Prancealot reeled in the Chad Brown-trained Blowout in the final 100 yards Friday when rallying for a 10-1 upset in the Grade 3, $150,000 Valley View Stakes on the Keeneland turf.

Blowout was one of three fillies representing the Brown stable amid a full gate of 14 in the 29th Valley View, which was run before an ontrack crowd of 17,166. After leading from the start of the 1 1/16-mile race, Blowout finally gave way when Lady Prancealot edged off to win by three-quarters of a length in 1:43.25 over a course rated good.

Giving Joe Bravo his third win in the Valley View, Lady Prancealot returned $22.60 when finishing three-quarters of a length before Blowout, who saved second by a nose over The Mackem Bullet. Bravo’s well-spaced prior Valley View wins came with Mingling Glances (1997) and Colonia (2018).

Lady Prancealot, a stretch-running Irish-bred filly, was scratched last Saturday at Keeneland from the Queen Elizabeth II Challenge Cup, a Grade 1 turf race won by the Brown-trained Cambier Parc. Patience clearly paid off for the connections of Lady Prancealot, as she came through with her fourth career win from 16 starts.

“You’ve got to get a trip when you have a closer like her,” said Baltas. “Joe did an awesome job. This is a very sweet victory.”

The owners of Lady Prancealot are Jules and Michael Iavarone, best known for their partial ownership in the IEAH Stables that raced 2008 Kentucky Derby winner Big Brown, and Jerry McClanahan. The daughter of Sir Prancealot now has earned $367,841 when finishing third or better 11 times.

Amid perfect autumn weather, Blowout, the 19-10 favorite under John Velazquez, led through splits of 23.72 seconds, 48.26, and 1:13.57 as the opposition began to come under rides. Down the stretch, Blowout was staving off all challenges, but the sustained outside run of Lady Pracealot got her home first.

“Johnny had a nice filly ahead of us, but my filly knew it was all over,” said Bravo.

Brown, the defending three-time champion trainer in North America, has dominated turf racing in recent years, particularly with fillies going longer distances. He had three starters in the QE II, just as he had three in the Valley View. His other starters Friday, Catch a Bid and Turf War, wound up fourth and 12th.