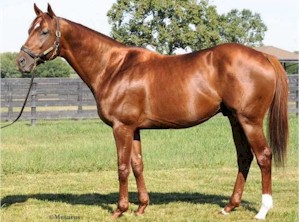 San Miguel, CA (August 2, 2017)-Grade One winning Tom’s Tribute has moved to Rancho San Miguel for his third breeding season. Winner of the Grade One Eddie Read in a stellar career that saw him win six of sixteen starts and $634,880 under the tutelage of James M. Cassidy.

Tom’s Tribute, under the ownership of DP Racing, will join the Rancho San Miguel stallion roster for a fee of $2,000 Live Foal.

Tom’s Tribute, a 2010 son of Lion Heart out of Halloween Fun by El Prado, was a $310,000 Ocala juvenile sale graduate that won or placed in seven stakes from 2 to 4; before an untimely fetlock injury while preparing for his five-year-old campaign.

Winner of his second lifetime start, Tom’s Tribute was off the board only once as a three-year-old and only twice as a four-year-old.

During his four-year-old campaign Tom’s Tribute came roaring down the stretch to win the Thunder Road Stakes at Santa Anita Park equaling the course record set by Wise Dan for a mile on turf in 1:31.78.

As an up and coming son of the successful sire of sires Lion Heart, Tom’s Tribute will be following such prominent sires as Kantharos and Line of David.

Rancho San Miguel has on site a number of 2017 foals from the first crop of Tom’s Tribute. Clay Murdock, farm manager, points out “their size, their scope and overall balance are giving these foals a real racehorse look. Across the board our clients are saying they are extremely pleased with their Tom’s Tribute sucklings.”