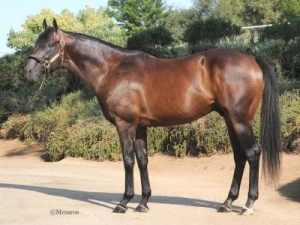 SAN MIGUEL, Calif. (Sept. 20, 2022) — The up-and-coming stallion Editorial, a stakes-siring half-brother to major sire Uncle Mo, has relocated from Maryland to stand at Rancho San Miguel in San Miguel, California during the 2023 breeding season. His fee is $3,500, live foal guarantee.

The 8-year-old son of War Front has exhibited his early potential as a sire with four winners from six starters in his first foal crop, led by the dual stakes winner Alottahope. A 3-year-old gelding, Alottahope won a pair of dirt sprints — Charles Town’s $250,550 Robert Hilton Memorial Stakes and Laurel Park’s $74,250 Star De Naskra Stakes — by a combined total of more than 17 lengths in his two most recent starts, and has earned $323,915 to date.

Editorial is also represented by the black type-placed multiple winner My Thoughts ($97,265) from his inaugural crop. The sophomore filly defeated eight of her elders in the $50,000 Fort Indiantown Gap Stakes on Penn National turf in her most recent outing, covering 1 1/16 miles in 1:39.94.

Produced by the multiple stakes-placed Arch mare Playa Maya, the dam of 2010 Champion 2-Year-Old Colt and leading sire Uncle Mo, Editorial boasts average earnings per starter of $69,499 — second only to Gun Runner among all current second-crop sires in North America.

“If I were to compare the U.S. stallion market to the U.S. stock market, I would say we are acquiring an emerging stock at the optimal time for California breeders,” said Rancho San Miguel owner Tom Clark. “Editorial has come out firing with quality in his first batch of runners, and has already shown that he can significantly improve his mares.”

“His rare combination of sire power in War Front and Uncle Mo is sure to appeal to our state’s breeders, who enjoy racing on a variety of surfaces and at a variety of distances,” Clark added. “Climax Stallions is retaining an ownership stake in Editorial, so he will be well-supported with top mares, including from our farm, as we take the baton and navigate him through the important next phase of his stallion career.”

A Gulfstream Park maiden special weight winner for Racing Hall of Fame trainer Todd Pletcher and prominent international owners Susan Magnier, Michael Tabor and Derrick Smith, Editorial initially stood in Maryland in 2018 and 2019, covered more than 100 mares in Peru in 2019 and 2020 and relocates to California from Maryland’s Anchor and Hope Farm, where he stood in 2022.

Editorial is available for inspection at Rancho San Miguel.