Curlin to Mischief sired his first foal when Billiondollarbaby dropped a filly on February 2nd. 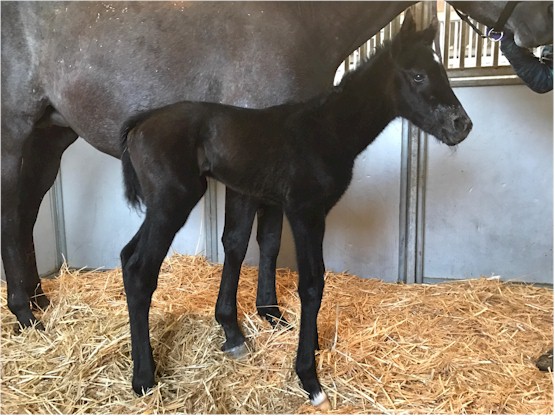 Rancho San Miguel farm manager Clay Murdock said “The first foal, for both Curlin to Mischief and the dam, stands up and over a good bit of ground. Her presence is noted by her beautiful eye and classic head. The bone, the body and her confirmation is what we had expected from this sire line.”

Billiondollarbaby is by Giacomo out of Sovereign Cross. Her Curlin to Mischief 2017 filly was bred by Crown Racing Stables, LTD.

Curlin to Mischief is by Curlin and out of Leslie’s Lady; she is the dam of multiple champion filly/mare Beholder and the Eclipse award siring Into Mischief.

Curlin to Mischief will stand for $3,500 live foal.

Slew’s Tiznow Son Gathers Up Another Stakes, Finishing Second First Foal is a Colt For Rousing Sermon
Scroll to top