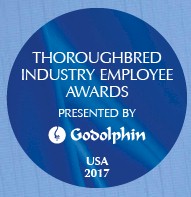 By Nicole Russo
Lexington, KY (August 30, 2017)-Finalists for the second annual North American edition of the Thoroughbred Industry Employee Awards have been announced.

A judging panel of five selected the finalists from a total of 142 nominations. A second stage of judging will take place Oct. 12, with a separate panel deciding the winners. Awards will be presented in five other categories – leadership on a farm and in a racing stable, dedication to breeding and to racing, and the inaugural newcomer award.

“I would like to express our thanks to Godolphin and Sheikh Mohammed for bringing these important awards to the United States,” Reid McLellan, executive director of the Groom Elite Program and chairman of judging panels for the second year, said in a press release.

“I initially thought that having a year under our belts might make this year’s judging a bit easier in some respects, but it certainly didn’t play out that way,” McLellan continued. “We had 25 more nominations than last year, so all the categories were well represented with experienced and talented individuals. And although we narrowed the finalists down to three in each category, I would like to express that so many others were recognized by someone they work for or work with which demonstrates specifically the goal of these awards; to recognize people who haven’t received recognition in the past for the good work they do. Just the fact that they’ve been nominated shows that they are, in fact, being recognized.”