California Thoroughbred Breeders Association member Clay Murdock has come a long way since his days as a jockey in the bush-league racetracks of Idaho. He recently celebrated 30 years at Rancho San Miguel, where he is the general manager. A knowledgeable and dedicated horseman, Murdock is in charge of more than 400 Thoroughbreds and has proved himself exceedingly capable.

When he was just 12 years old, Murdock learned how to exercise his father’s racehorses, joking that he was riding “in the bushes of the bush.” Although his father had a “real” job, father and son spent weekends racing Quarter Horses and a few Thoroughbreds in Idaho and Montana. Murdock was riding races as soon as he turned 16, and eventually he started training horses in his early 20s.

“I had a desire to come to California,” Murdock recalled.

(Clay) built the infrastructure, recruited and developed the most professional and knowledgeable staff he could assemble and has worked diligently every day to build a reputation beyond reproach for the farm.”
— Tom Clark, owner Rancho San Miguel

He took a job galloping horses at Bay Meadows to get started in the Golden State, then was offered a position by Quarter Horse trainer Russell Harris to head up a breaking and training facility in Southern California.

“I bounced around for six or seven years,” Murdock said. “I was breaking 70 or 80 head of Quarter Horses when Dr. William Marano was looking for someone to run a Thoroughbred farm. There were only 15 or 20 head, so it looked like a drop down. But I really wanted to move on with Thoroughbreds.”

That farm was Rancho San Miguel, a breaking and training facility with just one stallion, and in 1987, Murdock began managing it. When Tom and Nancy Clark bought the farm in 2000, they put their emphasis on breeding by expanding the property, adding a stallion barn, and recruiting new studs while phasing out the majority of the training. 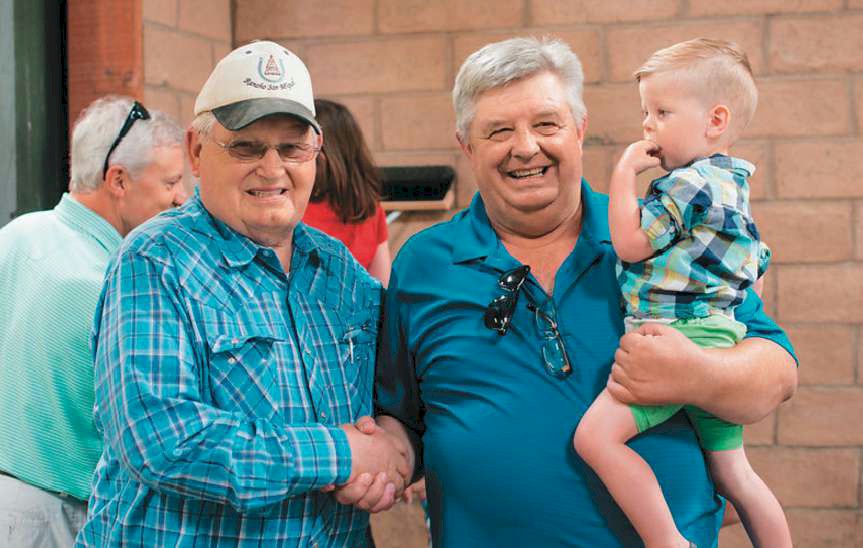 “Nancy and I bought the farm because we had complete confidence in Clay’s ability to manage the operation,” said Tom Clark. “He has proved that our faith in him was well founded. Clay led the difficult transition of Rancho San Miguel from a training facility to now one of the leading breeding operations in the state. He did this at a very difficult and challenging time for the Thoroughbred industry in California. He built the infrastructure, recruited and developed the most professional and knowledgeable staff he could assemble, and has worked diligently every day to build a reputation beyond reproach for the farm.”

With hundreds of horses on the property, Murdock finds his days busy.

“My routine is to check the foaling barn first, looking at how those that foaled are doing, and notify owners of foals being born,” he said. “I check in with Dr. Stacy Potter, our resident veterinarian, as she and the techs go around the farm. I palpate and check some mares myself, and by mid-morning I’m updating clients on their mares’ status. I sell stallion seasons, promote the stallions, look up mares and their breeding nicks, and certain nights I help with the foal watch.”

Of Murdock’s numerous duties, Clark said, “Clay possesses the leadership skills and management acumen to run the complex nature of a large breeding farm, and he is a horseman of the highest regard. His primary focus every day is to make sure the horses are given the very best care and attention humanly possible and that our clients receive the best service.”

Murdock lives on the property with his wife; together they have raised five children on the farm. He has two daughters, ages 12 and 14, who are still there, while two sons and a third daughter have grown up and moved on.

“My oldest daughter was just a year old when I first came to the farm,” Murdock said.

Although he has handled thousands of horses in his life, Murdock was most fond of Sudden Hush. Te California-bred won the Graduation Stakes and was second in the Del Mar Futurity (G1) in 1992.

“He was a neat horse during his breaking and training days, and a horse that I really liked,” Murdock said. “I used to enjoy watching the horses I trained run, but now in a general sense I enjoy watching our foals develop and tracking our stallion’s progeny.”

Murdock cited the 2017 El Camino Real Derby (G3) as an example. Slew’s Tiznow, who stands at Rancho San Miguel, had his offspring run first and second in the race, with Zakarof scoring by a half-length and More Power to Him getting moved up to second via the disqualification of Ann Arbor Eddie.

“Those two were in pastures together when they were young, so it was neat to see them in a graded stakes,” said Murdock. “When it’s ones you’ve raised, it’s special.”

One of Murdock’s tasks is to show the farm’s 11 stallions to clients and prospective breeders.

“I think we have a very strong roster,” he said. “We have a lot of variety, and a lot of pedigrees that cross well with different mares.”

At the top of the roster are grade 1 winner Haynesfeld and near-millionaire Comic Strip, both standing for $5,000. The royally bred stallions Curlin to Mischief, a half brother to Beholder and Into Mischief; and U.S. Ranger, by Danzig out of a Red Ransom mare, command fees of $3,500 and $3,000, respectively. Slew’s Tiznow, a full brother to graded stakes winner Slew’s Tizzy, is $2,500. Marino Marini, Southern Image, Northern Causeway, Rousing Sermon, Typhoon Slew, and The Pamplemousse round out the roster.

“It’s a versatile group of turf horses and dirt, sprinters, middle, and long distance,” Murdock said. “Anything you need, we have here.”

Murdock’s long history of horsemanship has not gone unnoticed.

“Clay has dedicated 30 years of his life to Rancho San Miguel,” Clark said. “He has accomplished so much during this time. Nancy and I are blessed to have had the opportunity to know and work with him so closely. Clay is not only the manager of our farm, but we consider him one of our closest friends.”