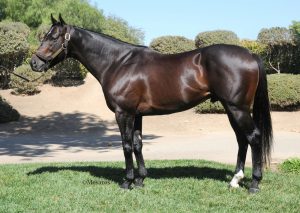 The first 2 two-year-olds by first crop Rancho San Miguel stallion Danzing Candy performed well at the April 12 and 13 undertack shows for the OBS Spring Sale of Two-Year-Olds in training in Ocala, Florida.  These are the first two-year-olds to be sold at auction at a two-year-old in training sale by this highly regarded first crop sire.

On April 12, a colt out of the Tribal Rule mare Public House bred by William Kerr and Jared Kerr and being sold by Mayberry Farms as agent as Hip 49, worked an 1/8th of a mile in an effortless 10 1/5.  Watch work HERE.

The following day, a colt out of the Stormy Atlantic mare Wind N Waves bred by Checkmate Thoroughbreds LLC and being sold by Randy Bradshaw as agent as Hip 404, worked an 1/8th of a mile in 10 2/5.  Watch work HERE. 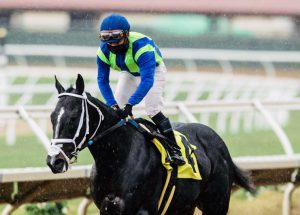 Good With People made his debut at the 2020 Del Mar summer meet easily beating subsequent stakes winner Big Fish in a Maiden Special Weight.  In his next start approximately 3 weeks later, he made all of the pace only to be passed late by Positivity in the $100,000 Graduation Stakes.  In his third and final start during the summer meet, he led all the way to win the $100,000 I’m Smokin Stakes.

After running 4th in a $150,000 turf sprint at Keeneland in early October, he returned to win the $150,000 Golden State Juvenile at Del Mar in the process evening the score with the aforementioned Positivity.  In his final start of 2020, he engaged in a threey-way battle on the lead in the $100,000 King Glorious Stakes, took the lead at the quarter pole only to tire slightly and finished 5th beaten only 1.25 lengths by the winner.

He finished 2020 as the leading money earning two-year-old California-bred with earnings of $203,000 including 3 wins, 2 stakes wins and 1 stakes placing in 6 starts while racing for his breeders J. Kirk and Judy Robison and trainer Peter Miller.

SAN MIGUEL, California – Rancho San Miguel has set 2021 stud fees for its roster of seven stallions, led by the globetrotting Sir Prancealot (IRE) whose fee will remain a California-leading $15,000 for his second season at stud in California.

Sir Prancealot, who sired progeny which won stakes in at least 6 countries in 2020, will return from Cornerstone Stud in Australia after breeding 105 mares in California in 2020.  His offspring have shown a propensity for high quality racing in North America with 17% Graded Stakes winners and 53% Stakes Horses earning an average earning per starters of over $210,000 from his only 17 starters.  They performed very well in the Breeders Cup last weekend when Miss Amulet ran a good third in the BC Juvenile Turf S-G1 in her U.S. debut and Lady Prancealot ran a very close 4th in the BC Filly & Mares Turf-G1.  They have also starred in the sales ring at Keeneland this week when the all 3 race mares by Sir Prancealot offered sold for an average over $766,000 led by Grade I winner Lady Prancealot, who sold for $1,600,000.

Danzing Candy, a brilliantly fast multiple Grade 2 winning son of Twirling Candy who bred 331 mares in his first 3 crop and whose first crop will be two-year-olds next year, will have his fee remain at $5,000.  His yearlings have been well received in California, Washington and Florida sales, topped by a $115,000 colt at the 2020 OBS October Yearling Sale.

Curlin to Mischief, perhaps the best bred stallion in California being a ½ brother to Into Mischief, Beholder and Mendelssohn, will have his fee remain at $3,500. His two-year-old son, Good With People, is a multiple stakes winner of $199,000 and is the current favorite to win California-bred Champion Two-Year-Old colt in 2020.  In the sales ring, another colt was sold for $85,000, which was among the highest prices at the recent 2020 Fasig-Tipton California Fall Yearling Sale.  His fee will remain at $3,500.

Slew’s Tiznow, a record setting, Grade 1 performing dual stakes winner, who has produced 74% winners from starters while earning over $4.1 million, including 6 stakes winners.  His fee remains at $3,000.

Richard’s Kid, a two time winner of the Pacific Classic-G1 and earner of over $2.4 million, who has produced 27 winners already, of which 7 have already earned more than $100,000, including stakes placed Sedamar and Sapphire Kid.  His fee remains at $2,500.

Northern Causeway, a beautiful Graded stakes winning son of top sire Giant’s Causeway from the family of top sires City Zip and Ghostzapper, is the sire of 19 winners to date.  His 2020 fee will be $2,000. 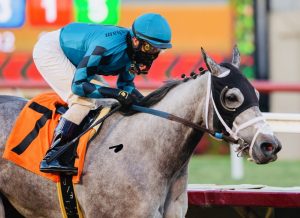 Mo See Cal, a California-bred daughter of the top Kentucky sire Uncle Mo who was foaled and raised at Rancho San Miguel, wins her first stakes off a 12 month layoff with a facile victory in the $100,000 Betty Grable Stakes at Del Mar.  She increased her earnings to $342,664 with her sixth win in 19 starts.  She was bred by Rozamund Barclay and is currently owned by Rockingham Ranch and trained by Peter Miller.

Good With People, a California-bred two-year-old son of Rancho San Miguel stallion Curlin to Mischief, wins his second stake when annexing the $150,000 Golden State Juvenile Stakes at Del Mar.  This was his second stakes win and 3rd win in 5 starts so far in his career and increased his earnings to $199,000.  He is the current leader for California-bred Champion Two-Year-Old of 2020.  He is owned by his breeders,  J. Kirk and Judy Robison, and trained by Peter Miller. 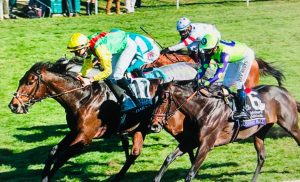 Lady Prancealot (pictured in the white silks),  a Grade 1 stakes winning daughter of Rancho San Miguel stallion Sir Prancealot, finishes a very cl0se fourth in the $2,000,000 Maker’s Mark Breeders Cup Filly and Mare Turf Stakes-G1 at Keeneland to increase her lifetime earnings to $740,841. She is sold two days later for $1,600,000 (see above). 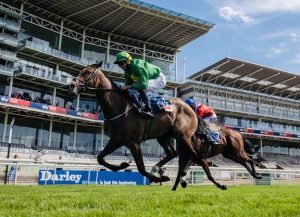 Miss Amulet (pictured earlier winning the Lowther Stakes-G2 in Great Britain),  a two-year-old daughter of Rancho San Miguel stallion Sir Prancealot, finishes a very impressive third in the $1,000,000 Breeders Cup Juvenile Filly Turf Stakes-G1 at Keeneland in her United States debut. as well as her first try around two turns.  With her second Grade 1 placing, she increased  her lifetime earnings to $262,961.

Good With People, by Rancho San Miguel stallion Curlin to Mischief, wins the $150,000 Golden State Juvenile at Del Mar on Saturday, November 7th by holding off his nemesis Positivy by 3/4 of a length for his second stakes win.  He is now the leading candidate for 2020 California-bred champion two-year-old and has earned $199,000.  Watch race HERE.

Good With People was bred in California by his owners J. Kirk and Judy Robison and is trained by Peter Miller. 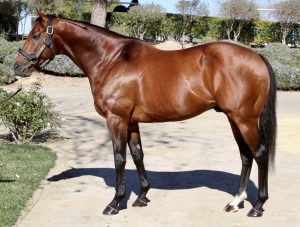 Two fillies and one mare by Rancho San Miguel stallion, Sir Prancealot, have been pre-entered in the 2020 Breeders Cup Championships to be held November 6th and 7th at Keeneland Racecourse in Lexington, Kentucky.

On Friday November 6, two-year-old filly Miss Amulet invades from Europe, fresh off  winning the Lowther Stakes-G2 and finishing 2nd in the Cheveley Park Stakes-G1 in her last 2 starts, to run in the $1,000,000 Juvenile Filly Turf-G1 at a mile on the turf in her stateside debut.  If she starts, she will become only the 17th progeny of Sir Prancealot to start in North America.

The next day, four-year-old Grade 1 winner Lady Prancealot ($640,841), after suffering through some races with little pace in California, returns to Keeneland where she ran perhaps her most impressive race last year winning the Valley View Stakes-G3, to run in the $2,000,000 Maker’s Mark Filly and Mare Turf-G1 at 1 3/16 miles on the turf.

A short time later, six-year-old mare Beau Recall, who has won four Grade 2 (including the last 2 Longines Churchill Distaff Mile Stakes-G2) races and finished second in five Grade 1 races (including a fast closing second in the First Lady Stakes-G1 to last year’s Breeders Cup Mile winner Uni in her most recent start at Keeneland) while winning $1,481,412, is pre-entered in the $2,000,000 Fan Duel Mile Presented by PDJC at one mile on the turf versus open company.

More than 20% of the sales catalog in the Fasig-Tipton Sale at Los Alamitos are by stallions that stand at Rancho San Miguel, including 15 yearlings by the red hot first crop sire Danzing Candy, 8 by Curlin to Mischief (sire of recent Del Mar 2yo SW Good to People), 5 by Northern Causeway, 6 by Richard’s Kid, 7 by Slew’s Tiznow, 13 by Tom’s Tribute and 2 by U S Ranger. 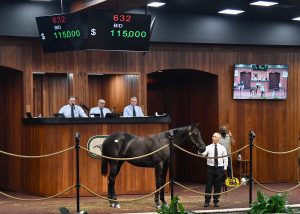 A colt by California first crop sire, Danzing Candy, topped the second day of the 2020 OBS October Yearling Sale today when sold for $115,000 to Donato Lanni, Agent.  This colt was bred by Valencia and Dan Leach in Kentucky.

More quality Danzing Candy yearlings will be available for sale next Monday, October 19 at the Fasig-Tipton California Fall Yearling Sale to be conducted at Los Alamitos Racetrack in Cypress, California.

By Eric Mitchell
San Miguel, CA (October 22, 2019)-Reverse shuttler Sir Prancealot , who will be at Rancho San Miguel in California for 2020 Northern Hemisphere season, will stand for $15,000 to approved mares, the farm announced Oct. 22.

Imported progeny by the Irish-bred son of Tamayuz have made an impact on American turf racing this year, led by three-time graded stakes winner and millionaire Beau Recall, winner of the Longines Churchill Distaff Turf Mile Stakes (G2T) and Yellow Ribbon Handicap (G2T) this year and runner-up in both the Longines Just a Game Stakes (G1T) and Rodeo Drive Stakes (G1T). The 5-year-old mare is being aimed for the Dec. 1 Matriarch Stakes (G1T) at Del Mar.

“This is a unique situation in that Sir Prancealot is already proven to be an elite stallion in North America before even standing here. It’s unprecedented to have a horse with the hype of a young incoming freshman stallion along with proven graded stakes results from small crops,” said Adrian Gonzalez, manager of the Sir Prancealot syndicate.

Sir Prancealot stood at Cornerstone Stud in South Australia during the Southern Hemisphere breeding season. He has been represented by seven black-type winners to date, of which four have won graded/group stakes.